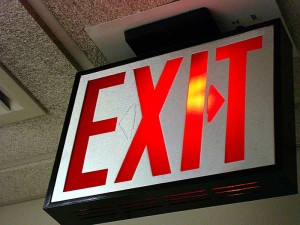 VP of Jensen Hughes, National Fire Protection Agency 92 (Smoke Control Systems) technical committee member and industry veteran Mike Ferreria weighed in as well. He states that the problem with traditional exit signs is that they’ve become just another average visual stimulus within buildings. Ferraria compares the need for emergency signage updates to the recent trends regarding fire alarms. Experts noticed that the traditional tone used to alert occupants of a fire began to be ignored and did not create the sense of urgency required for fire emergencies. Similarly, the public is beginning to relate emergency exit signs as just another part of the building and not as an important part of emergency procedure.

Verzoni argues for the need for dynamic emergency signage in America. She states that putting effort and resources toward making dynamic signage the new norm will make buildings much more safe.

These ideas continue to be researched and developed today. Continuing to explore the advancement of fire and emergency evacuation signage will be one of the most important aspects of the future of building safety.

Building Maps is the industry leader in fire evacuation, security, and campus map illustration services. If you would like to hand off the map illustration of your buildings and property to the experts, get in contact with our team or request a quote today!

Building Maps is open and working remotely. We’re available, when you are. Stay Safe.